This is Tom and his parents say he is very intelligent. Wait, what does that even mean? Well. A majority of people would assume he gets very good grades in school. But even though this is a sign of intelligence. It isn't the only defining factor of what makes someone smart. IQ test, for instance, are a common way to best intelligence. But most of there test examine proficiency in spacial, verbal, or mathematical intelligence. American psychologist Howard Gardner thought this was strange. As there are many ways people can be intelligent. He then developed his Theory of Multiple Intelligences which describes nine areas where people can be proficient. 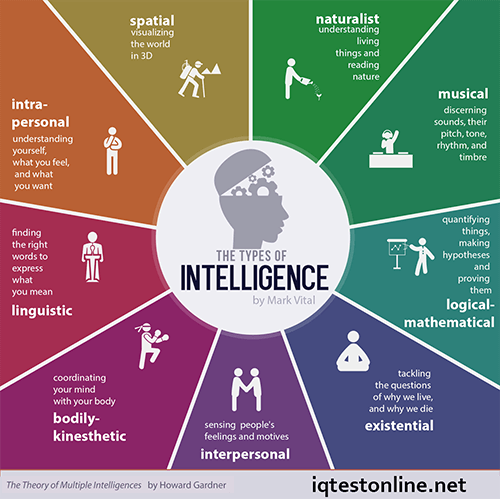 Think of Katniss Everdeen from the Hunger Games. Chuck Noland from cast away and Julia from of the Wolves with a keen eye to detail and easily noticing changes in their surroundings. People with high Naturalist Intelligence will be very good at surviving in the wild. They have a cunning ability to distinguish between different animals, plants, clouds, rocks, etc.  In today's modern world they are able to distinguish between different kinds of make up, cars, smartphones and another items.

Having a high music intelligence indicates you are very good at things to do with sounds. There can include characteristics such as rhythm, tone and pitch. If you've got a high musical intellegentce, you're good at recognizing, creating and reproducing music. You might even have a high mathematical intellegentce too. As there two things often involve similar thought processes. If you happen to play an instrument and have a high Music Intelligence, you're probably quite good at playing by ear.

People with a high score in logical Mathematical Intelligence are good at abstract symbolic thought using letters in formulas to indicate relationships between factors.
and reasoning skills such as inductive and deductive reasoning. They are good at considering hypothesis, carying out calculations and quantifying data.

People with high Existential Intelligence are good philosophical thinkers. They're good at philosophizing and thinking about questions that might not have a real definite answer. They have a sensitivity towards the deeper questions of life and like challenging related concepts. They're not easily confused by their own feedings.

People with a high Interpersonal Intelligence are often at communicating with others. They are good at noticing shifts in others moods and motives as well as taking miltiple perpective on a subject. They often score high on empathy and do well in socially oriented work such as teaching, social work and acting.

People with this type of intelligence love movement. They have high body awareness and good moter skills, because of that they often excel in activities that invoke body movement such as sports and dance. They learn best by doing and are keen to figuring things out through experimentation.

People with a high Intra-personal Intelligence are good at understanding their own feeling and thoughts; and working them to achieve thẻo goals.
They are good at motivating themselves from the inside-out without any visible or physical reward. It involves more then just understanding and planing thẻo goals. But also a less definite apprecation of the human condition. People with a high Intra-personal Intelligence are often good philosophes and psychologists.

People with a high Spatial Intelligence are good at things that require mental manipulations of physical perpectives.
These people tend to be very skilled at map reading, Jigsaw puzzles, and seeing or drawing objects and situations from a different perpective without necessarily have seen it from that perpective. They do not easily get lost and are often at woorking their way around a maze. Spatial reasoning, image manipulation, graphic and artistic skill are often well developed in people with a high Spatial Intelligence. People with this skill are often at sailing, being a pilot, scupting, painting or designing architectural features in spaces.   Young people with good Spatial Intelligence are often drawn to visually stimulating activities, like drawing.