IQ (Intelligence Quotient) is a total score derived from several standardized tests designed to assess human intelligence. It was a concept given in the late 19th century by British scientist Francis Galton.
People with high IQ are able to manipulate, process and analyze information faster than normal people.

What is the definition of an intelligent person? 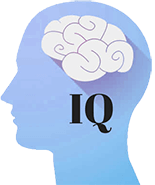 Do you have a genius IQ score?

Look at the table below:

What is my IQ?

You can IQ test here and get free results.

How is IQ calculated formula?

To measure IQ, psychometricians designed the IQ test to test the logic of each person. For the first time, IQ was used in France in the early 20th century when people wanted to overcome their difficulties for kids at the beginning of school.
Hans Aizenk modified it and became the most complete IQ test. The test became extremely popular in Europe in the 1950s.
People calculate their IQ scores everywhere.

Hans Aizenk says: "To calculate IQ, you need to pass an IQ test with questions about logical reasoning, comparisons, arithmetic, memory, general knowledge, computation, logic".
Then take the average score of the skills. IQ is not an absolute measure.

Determining the IQ is to diagnose and treat diseases that affect learning and working. However, do not depend on IQ numbers to evaluate a person's ability.
During a person's life, the IQ is very variable and does not always increase. IQ is most stable at age 16 and may increase slowly until age 30, then it will decrease.
The highest IQ age of a person is between 20-30 years.

Can I increase my intelligence?

The Japanese are trying to train their children to increase their minds with special curriculums and nutrition. However, it only works for a person who is still in development (<16).
For adults, the IQ has stabilized, brain training helps to increase IQ but not much. Follow these ways to improve your intelligence