What is Emotional intelligence?

Emotional intelligence (EQ) is a number that is used to measure your emotional, also known as Emotional quotient (EQ) and Emotional Intelligence Quotient (EIQ) People with high EQ are able to recognize, evaluate, control and regulate the emotions of themselves and those of others, so they can become a good leaders. Similar to IQ, EQ is also one of the important indicators to help you become successful. 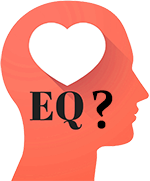 Emotional intelligence, defined in 1997 by psychologist Peter Salovey and John Mayer. No not that one - is the ability to perceive, understand, manage and use emotions. I don't know about you, but I know plenty of smart people who have a hard time processing social information. The most brilliant mathematician may struggle to communitcate with colleagues, neighbors, or staff at the local deli. Like wise, Sherlock (Sherlock Holmes) often annoys, offends or even baffles those around him.

- Perceiving emotions mean being able to recognize them in faces and even in music, film and stories.

- Understanding Emotions mean being able to predict them and how they might change.

And managing emotions comes down to knowing how to appropriately express yourself in various situations. And finally, emotional intelligence also means using emotions to enable adaptive or creative thinking; like knowing how to manage conflict or comfort a grieving friend or work well with others. Much like creative intelligence, emotional intelligence can be measured to some degree through testing, but there's no standardized way to like, assign a numerical value. So of we can't perfectly quantify things like creativity or emotional smarts.

At the end of the twentieth century, in many Western countries, people were more interested in EQ and educated it to the younger generation. EQ is also hot in USA when Daniel Goleman published a first book about emotional intelligence in 1995. He posits that emotional intelligence is as important as IQ for success. Goleman presented the problem very well and convincing argument. Nowadays, Psychologists appreciate the role of emotions and their impact on human life. The EQ is measured through the EQ test.

How much is your EQ?